Implementing the next logic for aligning to the border when we approach the border from the right.

You can approach the border/wall from the right or from the left. In the previous video we finished with doing it from he left. Now we continue with extending the program to be able to approach the wall from both sides. But it is not always that easy. 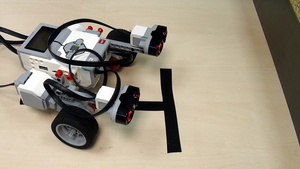 Previously we did a program that was aligning the robot to the border using 2 LEGO Mindstorms ultrasonic sensors and it was working like this. In this video we'll also introduce the other logic for aligning the robot when we approach from the right. How can we do this? Let's see in the program.

So I'll just remove this blocks, like this, and we'll implement another logic. The other logic goes like this. We can use a switch block. In some of the previous programs we've used switch blocks and today we are again using a switch block. The goal of this switch block is to detect which of the sensors sees the border first. We'll add a loop and in this loop we would constantly check. What are we checking. We are checking the sensor on port 4 and we get the distance in inches. Let's say 4 inches. We are comparing for value less than or equal to 4 inches. When the sensor detects a value of less than or equal to 4 inches it will execute the blocks in this part of the switch and when the value is greater than 4 inches it will execute this part of the block.

Position the robot, like this, run the program. The robot moves and the moment the sensor on port 4 detects the border we stop. Now we must do the same thing for the other sensor.

What we basically have is a program that stops near the border no matter if we run from the left or from the right of the border.

Now what's left is to add the logic for aligning to the border no matter if we run from the left or from the right. It will be the same logic that we've used in the previous video but we'll continue with this logic in the next video.