Improving the construction for the World Robotics Olympiad missions. The improvement is in the position of the sensor and the size of the balls container.

There are two angled beams at the front of the construction with which we can collect the different treasures. The robot must be limited to 25cm/10inches.

Using two chains we release on ball at a time and in this way we count how many balls have we released. Counting is necessary because we need to release the exact number of balls from the robot construction.

The limitation of this construction is that there is a large friction in the container because we have loaded it with too many balls. In the next videos we would improve this robot.

WRO Robot with chains for pingpong

This is one of the robots used in World Robotics Olympiad. It uses chains to move ping pong balls out of a container. 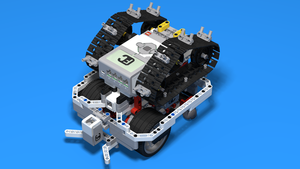 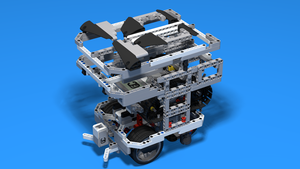 In this video we continue with the World Robotics Olympiad (WRO) 2015 elementary challenge and previously we build a robot for solving some of the missions and today we continue with improvement of this robot. This here is the improvement. It's quite large so let's see how it works. The robot must accomplish 2 missions and the first mission is connected with these boxes. They are different colors, we have red, we have green colors and they are on the field. So we move, we must collect them and after we collect them we detect the color and depending on the color we must release a different number of balls from the container above. Then we must leave the box at another place at the field. So we move with the robot, we collect and then we leave the box. You can see these 2 angled beams at the front of the robot and they are very useful when you want to collect an object because even if you are not aligned to the object you can again collect it. You can see that you always collect it. They are not aligned, and you move and it's a nice, smooth and very convenient way for collecting different objects. always use this 2 angled beams. The second part of the competitions is connected with releasing different number of balls depending on the color that you have detected and we built this robot, this is the second try. We have the container for the balls, above the robot and there are some limitations for the size of the robot, it's 25 cm which is about 10 inches and we can measure with a ruler and we can see that the whole robot is about, less than 25 cm. It is always convenient to build a small attachment from LEGO parts, like this to take a measurement of this attachment and to know that this is for example, 24 and a half cm or about 10 inches. Then you can use this attachment to actually measure your robot. In this way you can keep the robot in the specified limits, here and here and above and we can see that our robot even though it is quite large,

We have 2 balls at the right side of the robot and we have 2 balls at the left side. We move with the robot and then we release the balls from the back of the robot. You can see that we have 2 chains. These here are the chains and these 2 chains are powered by single motor and they are connected, you can see the axles here, you can also find the instructions for building this robot below the video, but we have the motor, it is on the inside and we have an axle that controls both chains. Now the chains are not aligned and this would allow us to release only 1 ball at the time from both chains. There will be a case where both chains automatically, simultaneously release a ball. It will be first on of the chains, then the other chain. Let's see this in action. I have a program. the program just moves the motor for about 120 degrees. let's start the program with 2 balls.

So we have 4 balls and it's a working construction but it has a few limitations. First as you can here, there's some noise when the chains are moving and this is because some of the parts, that are connected to the chains, when they move they touch the motor, right here, this motor here.

They touch the motor right here. That's why we here this noise and that's not very nice because we have some friction between the parts and the motor. When they are moving above the motor. The next even larger problem with this construction is that it does not work for all the balls. I'll just load all the balls in the container

Then you can see that there is even a larger friction between the balls on the inside in the container. There is so much friction that we can't actually move the chains. Now if we release part of the friction by moving the balls by hand the robot will start working.

But this require us to touch the robot with a hand and that's not possible during competition, of course. It must be an autonomous robot. This is one of the problems with this construction. it works for a few balls, like, for 10, 15 balls, but when you fill the whole container with whole 25 balls it actually does not work because there is friction between the different balls and the LEGO parts. You can't actually move and release one ball at the time, especially with this construction, but I suppose that it will be nice to use it in other competitions, with other challenges and it's very interesting because you have the 2 chains and if you find a place, a competition, a mission, where you are using this construction give us a link below, record it, comment it so that we can know it and we can help you with making it work even better.