In this second part we continue with the next few tasks from the FIRST LEGO League (FLL) 2013 competition. Using the same rubber band attachment we lift the house and collect a few of the humans and cargoes. 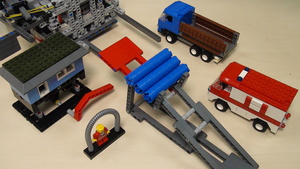 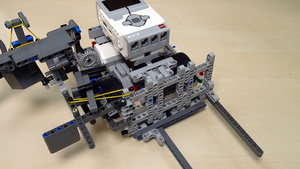 In the previous part of the tutorial we used this attachment to solve The Ambulance, The Truck and The Tsunami missions from the FIRST LEGO League (FLL) Nature's Fury competition and the interesting part was that we had part of the attachment that initially is at the front of the robot but then when we move, we accomplish a mission and then the whole attachment returns at the back of the robot and now we have more space at the front. Let's continue with accomplishing The House and collecting The Human.

At this stage The House and the Human are somewhere behind the robot, so we move with the robot and we are somewhere here and The House is positioned, like this and The Human is positioned, like this. There are different lines on the field. You can align to them and you know where exactly you are because you have the color sensors at the robot and now we turn back and we try to take the loop with this part here. So we turn and we take The Human. Of course we can modify the extension right here. We can make it longer, shorter, lower, higher, so that we take exactly the loop and as we take the loop the whole border is right here, the border of the field. We push to the border and what will happen is th following.

Imagine that the border is here, now when we push, we move with the robot, we push to the border and these axles here will trigger the a part of the attachment that will lift The Human up.

Let's do this again. We load it, it's like this and The Human is low and then we push on the border and we lift The Human. In this way, the loop with The Human cannot fall from the robot, so that's the second rubber band. I'll load it, now turn on the other side so that you can see it on the camera.

Now, when I push on this axle to the border

this lever here is released and there is a white rubber band and we lift The Human up. Then as we lift The Human up and we were like this and this here is the border, on this side of the field. There's something to mention, there was enough space on the field so that the robot could move between the border and The House. So there is a space for one and a half the size of this robot. The robot can move between the border and The House. Then as we have taken The Human, we turn with the robot and you can see that The Human cannot fall and we move back and we can use this part of the robot to align to the border because if you remember the border is here and we just move back. When we are moving back, The Human moves above The House and we move back and we lift The House. Then we return back to base. The base is somewhere there. That's how we solve five missions with a single attachment with 3 rubber bands. You can find the instructions for this rubber band below. Of course, I doubt it that you can use the same attachment for any other mission because it very mission specific, but the principle is not very specific, for example lifting some of the collected loops so that they don't fall with a rubber band, without using a motor it's quite smart to do. The other thing that's also very smart is initially you can have the whole attachment at the front of the robot like this, and you can do things with this attachment but at a certain point when you are solving The Tsunami you just push on the attachment and it returns to the back of the robot and you can use now the same attachment for The Human. I hope you like this attachment it's, again a pinless attachment it involves a number of rubber bands and in the next videos we'll continue with solving other missions for The Nature's Fury with other attachments but before continuing let's do a very quick recap of the whole attachment. You move outside of the base, you reach The Truck, that's the first mission you solve, you move with The Truck, then you reach The Tsunami, when you reach it you push the lever the 3 parts fall, here. and part of the attachment as you move is returned back, then you move, you collect The Ambulance and you leave The Ambulance with The Truck at a certain point, at a certain position on the field, then as you leave them, you return back, you make a turn and right here you have The Human and The House.

When you move back with the robot,

you collect The Human, The Loop and as you collect The Loop you move to the border and when you move to the border you move back to the border, you push on the lever, right here, and The Human is lifted so that it cannot fall and then you continue like this, push on the lever of The House and you lift The House, and then you return back to base and that's the recap of the attachment. Now it's, at certain points, fragile, but I'll be happy to see some of this principles here, used at other competition models, for example this year's Truck challenge and if you use them share the videos with us so that we can give you some feedback.