Starting with the World Robotics Olympiad 2014 Junior-High challenge we first catch the object on our path. We discuss a good mechanism for catching and lifting balls that can do two movements with one motor.

Two robots are orbiting a single object. One of the robots is "factory", given by the organizers. The other is build by us.

On our path there are elements that we should collect or skip. We describe the solution of lifting these elements.

Building instructions for a robot for the World Robotics Olympiad Sputnik competition. This is the light version without the lift at the top. 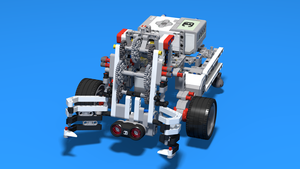 EV3-G program for collecting object in the WRO sputnik competition 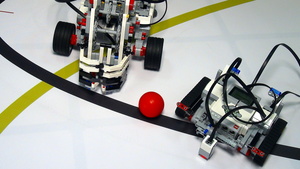 Build the construction. Lift a ball with it. Place the ball at a distance of 1 meter. Take a picture or record a video and share it with us in the comments section below.

- In this video and the next few of the series, we'll start we will start working on the World Robotics Olympiad 2014 Junior High Competition. It's a very interesting competition. And this is a small model of the mission field. The competition is the following; we have an object in space, and we have two satellites that are in orbit around this object. The first one is the green one that's moving on the green line. And the second one is the black one that's moving on the black line. This here is called the factory and this factory satellite is orbiting the large orbit in the middle. And we must program, construct and program the other satellite that will be orbiting the green line. And on the green line we have some small objects, balls, and we use these balls and we must collect these balls with our green satellite. And when we collect them, we must put these balls on the factory satellite. So both satellites are in orbit. This one collects and then it must find a way to place the balls on the satellite object. And this is the problem that we are solving in the next few videos.

The first thing that we should think about is how do we construct the satellite, our satellite. Because the factory satellite is given by the organizers of the competition. This one here, that's the black satellite. That's the default and it has a container but we can't place the container currently. But this satellite, it is the factory satellite. And it's orbiting on the black line. And the other satellite, the green satellite, is our satellite. And it must collect objects. So we came up with the construction and the construction looks like this. This here is the construction for the green satellite. And with this robot we can follow the line, the green line. We can collect different objects because we have an attachment at the front of the robot. And it is also very interesting that when we lift this attachment, we can move above objects that we don't have to collect because there are such objects on the green line. Some of them we have to collect, some of them we will turn, skip, etc. And because the robot is quite high, we can place the elements below the robot. And we can move with the robot over the elements. And the elements are actually lego, one of the balls from lego. This here is our construction. Let's first check out how do we collect an object with this construction. First we have the ball, and we must catch and lift this ball and put it in the container of the other satellite. So we move with our robot and we have this nice construction at the front of the robot, the manipulator. And it's again interesting because it has two movements with a single motor. First we close the manipulator like this and then we lift again with the same motor. Because at the front of the manipulator, we have an ultrasonic sensor right here, we can detect where the ball is and we can move with this ball. And now as we have lifted the ball, we can move over other balls. So for example if this ball is here, the robot is high enough so that we can move over this other ball. If we have to collect it, we use the manipulator. And if we don't have to collect it we just leave the hand and move over the ball. And it's a nice strategy because with such a large robot we don't have to turn and to try to avoid the obstacles. We can just move over the obstacles. We can then lower and leave the ball. We just turn the medium motor in the opposite direction. Okay let's try and see how this works on the field. But since the video is getting already over five minutes, I prefer to continue with the field in the next video.