In this video we are solving part of the FIRST LEGO League Senior Solutions challange missions (FLL 2012) using LEGO Mindstorms NXT robots. I make a step by step explanation of each move I make. The goal of this video is to help you with ideas and suggestions on how one should look at the missions.

Here is a list of episodes, that might be useful to watch. The following videos explain things we use in this tutorial: 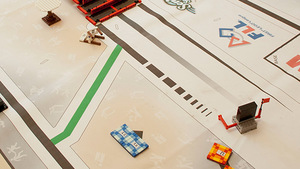 In this video I will show you how to solve three of the missions from the 2012's competition Senior Solutions. By the end of the video we will have the Blue Plates in place, the Chair in base and the flag of the Video Call mission raised. This will earn earn us 65 points.

In order to solve the missions I have used the competition robot we have build in episode 13. First I deliver the blue plates and I have added these two angled beams on both side for two purposes. First they keep the Blue Plates in one place. And second we align the robot to the Blue Plates on the mat. Then we have this flexible attachment which pushes the red lever while moving backwards. And at the end I have this arm connected to the third motor which will take the chair. Now let's take a look at the final program.

I have divided the program into two parts. In the first one we deliver the Blue Plates on the field and in the second we raise the flag and take the chair. Let's stop on the first one.

First I've used a block we have shown in one of the previous videos for aligning on a black line. We align on the black line surrounding the base in order to skip the time we lose in positioning the robot into the base. Then we make a 90 degrees turn and go forward more than 700 degrees to skip these two Black lines. I skip this one, because it is tilted and you can hardly align on it, but then I alight on this grey line. The tricky part about it is that it has different values for the two sensors. So actually I have used the block for aligning on a black line. But this time the value which is critical for the first sensor here is 80 and the value for the second sensor is 90. After we have aligned on this gray line we go forward and deliver the Blue Plates. Let's get back to the program.

So this is the program for delivering the Blue Plates, now let's see how it works.

Now let's get to the second part of our program. Here we will raise the Flag and bring the Chair to base. First we go backward and with this flexible axle push the red lever in order to raise the flag. Then we make a turn at something like 30-40 degrees and go forward until we reach this zone here. We align on the green line and put the arm down in order to take the Chair. Afterwards we make several turns. Something like this one and get to base.

So the whole program looks like this. You can find the programs and the MyBlocks as well as instructions for building the attachments below this video. Now let's take a look at how the whole mission looks like.