How do you synchronise the two levers to move with the same speed, but in opposite directions? 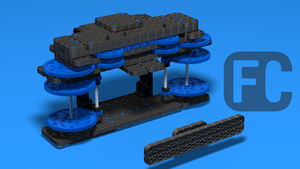 In this video I would like to discuss the purpose of these two gear wheels that are in our attachment for throwing and the end result from using them is that we have both levers that are hitting on the ball move in sync. Like this.

You see that both levers move the same distance and in the same moment. And this is with only one motor. Let's see how you can implement this. I'll remove the motor and on the attachment you can see that we have two axles. We have an axle here and an axle here. So, when we rotate the first axle this will transfer the motion to the first lever but in the same time we have a gear wheel on this axle that's connected to another gear wheel. And when you have two gear wheels they change the direction of their rotation and this means that the other axle will rotate again in sync with the first axle but surely in another direction. And from there the whole system of gears on the other side of the attachment they rotate in a different direction. And that's a very common solution and you should try to use it whenever you have two levers and you need to make these two levers rotate in sync but in different directions. Now, it doesn't matter if you add the motor on this side or you add the motor on this side. It will result in the same hit on the ball. I forgot to mention that you can implement this but it's very important that for this whole attachment to work and make the two levers work in sync you must have these two gear wheels with the same number of teeth and that's very important. If you connect another wheel right here both levers will move in a different direction but not in sync, not with the same speed. So, you must have these two wheels with the same number of teeth. And this will make sure that the levers rotate with the same speed but in different direction.