It has been a long road with the last 8 BigDaddy competition robots video tutorials, but we finally arrived at the Differential Lock.

To remind yourself about the differential and its purpose you can take a look at this robotics video tutorial. In summary a differential is used when you need to have different rotation speeds on two wheels while controlling both wheels with a single motor. Using a differential in a robot constructions you reduced the friction between the tires and the mat and the LEGO Mindstorms robot is much more precise.

Not always, but sometimes using a differential has a negative impact on the robot road-ability (this means going "off-road"). Then, it is good to have the lock that would make the wheels move in sync. Take a look at the video tutorial to see the lock in action.

Other episodes from the series: 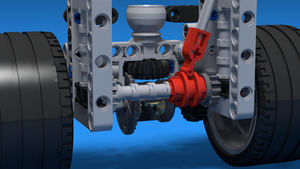