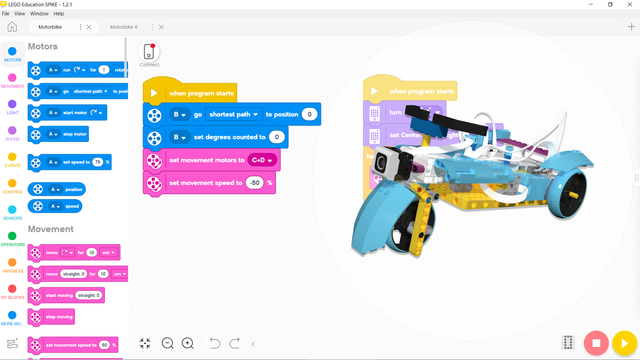 This program is a solution to the lack of a differential on the robot, which makes its turns slower and bigger! The program reads the realtive angle of the front motor, used for steering, and feeds it to the back motors so as to make one go faster and one slower! This makes the robot turn much faster and smoother. The program requires for someone to turn the steering motor, so experiment with different turning angles and push the limits of the robot! Make sure the markings on the moving and non-moving parts of the front motor align, because that is an essential part of the program! 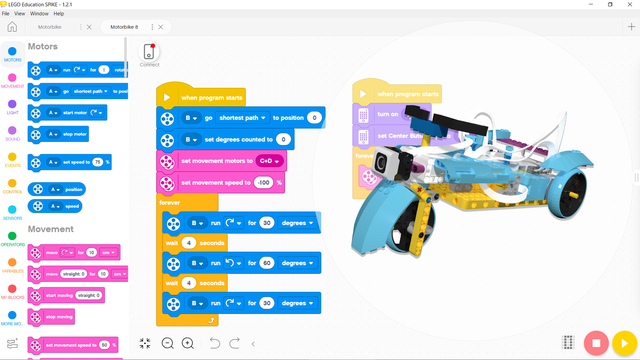 Program that makes Motorka move in an 8 shape

This program makes Motorka - LEGO SPIKE Prime motorbike robot move in the form of an 8 (or infinity sign:))! It uses the other program for the robot as a base, but instead of letting the steering free, this program controls it so that the robot moves in a shape! 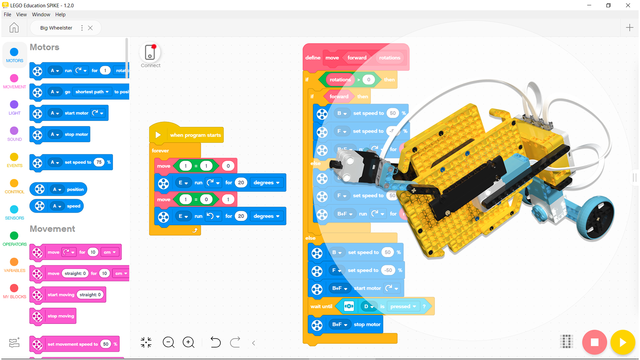 This program makes Big Wheelster - LEGO SPIKE Prime robot move forward until it bumps into something! This robot has one big wheel controlled by two medium motors, what's interesting is that the motors need to move opposite directions to make the wheel turn! That is why we have made a My Block to controll the robot. It has the option to move for a set rotations or indefinitely(if you put it to 0 rotations). It also has a logic option for the direction that the robot should move, so 1 = forward and 0 = backward.

The program makes the robot turn backwards after it bumps into something, using its back wheels to make sure it doesen't bump there again!