In this 10 out of 10 tutorial we demonstrate the accuracy of the robot when we use acceleration in its movements. The robot has not sensors attached to it and it is not making use of it's internal sensors. The goal of the tutorial is to give you the understanding and to make a demonstration of how difficult it is to consistently reach a mission model without the use of sensor even when we use acceleration.

Acceleration is a good tool to improve accuracy and reliability. You should use it. But you can not count on it. Acceleration only gets you this far.

In this video tutorial, we use LEGO Education SPIKE Prime robot and try to reach a specific mission model somehow at the other end of the field and this is a ten out of ten tutorial. We start with the robot and in this ten out of ten video, we are not using any sensors. What we've done is that we are using an acceleration block and this improves the reliability and accuracy of the robot a little bit. So we are not using any sensors. Sensors is something that we use in the next tutorials. At this stage, let's explore how accurate it is to use only the movement blocks. So where the robot arrived the first time, now the second time, it's about two to three inches, or about 10 cm difference there, not very consistent. Again, you can check the tutorial in the lesson and the program with the explanation. Third time, not very successful. The goal of the acceleration block is to reduce the slip on the field. This makes the robot kind of like more consistent, but as you see now, it didn't arrive where it arrived last time. So it's difficult to predict the behavior of the robot only using blocks for movement and it's difficult, especially when the mission model is somehow at the other end of the field. Next run, let's see how this goes. And it's way far off. Last time you saw where the phone is. So somehow there is a gap of 25 cm, like ten inches.

But we continue running with the program, we continue demonstrating the robot just to see how difficult it is to reach the mission model.

to turn simple movements, but sometimes wheel could slip, sometimes an attachment could behavior on one side than the other. And it's difficult, it's difficult to get to a certain position every time without the use of the sensors. We'll be using sensors in the next tutorials, that's for sure. And we are working in this course on demonstrating how to build reliable and consistent robots and how to use Scratch as a programming language to program the Lego Education SPIKE Prime robots. In this run, you see, it's quite a difference there.

And this is our ten out of ten tutorial. It was difficult to get the robot working and what I hope you are left after this tutorial is that it's most of the time absolutely necessary to use sensors. 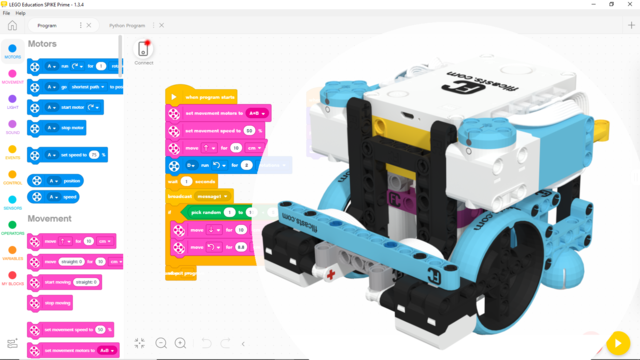