When aligning backward the robot is still very consistent. It does not matter the direction in which we align. What you will learn from this tutorial is what is the consistency and reliability of the robot that you could expect.

Watch it. Watch it again. Watch it several times. This might easily be one of the most important tutorials and concepts that you will see for FIRST LEGO League competitions. The competition missions are not accomplished with complex programs, but rather with small simple programs that are well connected on after the other.

This is a ten out of ten tutorial in which we do ten runs and we align with the two sensors of the LEGO Education SPIKE Prime and we align to a line by moving backward. We've done the tutorial and now we would like to see how consistent and reliable this program is by doing ten runs. Start. Move backward. Align. Perfect execution. Let's try again from the other side. Again. Really well positioned robot and know where the robot is on the field. Technically, the program for aligning forward and backward with the robot is one of the most useful for FIRST LEGO League competitions because it's quite easy to implement. It's very consistent and very reliable. And you know where the robot is on the field. Again.

Let's do it one more time.

The way the program works is that it moves backwards and the moment one of the sensors detects a black line, it stops the corresponding motor on its side and only the motor on the other side will continue working. Now you can see how it looks from the other side. Move backwards. Align. What you could do now is download the program and start experimenting with the robot. Start experimenting and see how consistent and reliable the behavior of the robot is. See you in the next tutorial. 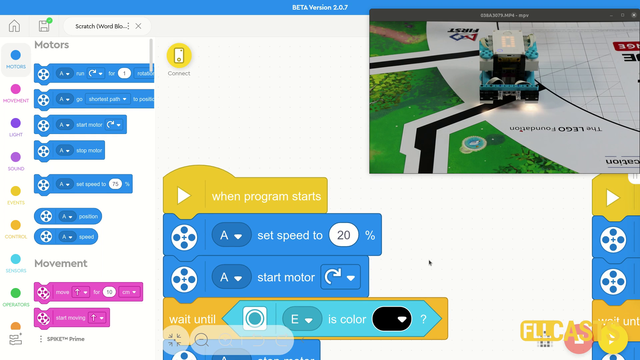 Backward align to a line with two sensors