In this last part of the tutorial we actually lift the rocket modules and prepare them for lauch. First we have to collect them in the right order and them somehow lift them. Below you could see the field of the World Robotics Olympiad (WRO) 2014 Elementary challenge. The blocks must be collected from the yellow regions. For this robot we use a grabber developed by Dave Brauer. We just extend it and modify for this robot. Check out the materials section.

Building instructions for a Robot Grabber used in the World Robotics Olympiad competition runs. The grabber is build with LEGO Mindstorms EV3. The base of the robot is available at /materials/69-wro-robot-2014-elementary 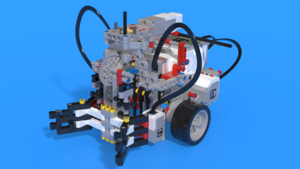 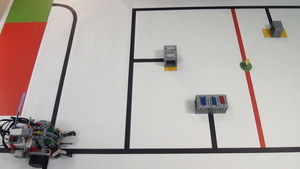 We placed the modules of the rocket, we launch them, we also collect the humans and we clear them from the area and now the subject of the video is how do we catch and move these modules, with our robot.

We catch and lift the module. We can stop right here and we can move, over the humans. Then we move, we collect the humans and then we can return the whole module and push it to the rocket launcher with the same attachment. If we now reverse the motor and we can return and place it back.