Using the rack depends on the experience of the team. Based on this a different number of gear wheels and racks would be used.

Many of the straight rack parts

When using a rack it is important that the rack is stable. Direct the students on using more than one of the straight rack parts with more than one gear wheels. This will result in a much more stable rack.

Where to place the rack

Placing at the front of the robot would be more difficult than placing on the sides of the box. Robot. Depending on the student's robot construction they could choose different places for the rack, but try to direct them to place it at the sides. This would generally be much more easier

This construction demonstrates one way of using а rack with a gear wheel. It allows to turn circular motion in to a liniar one. 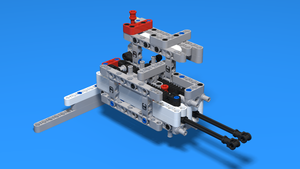 A few notes for the teacher when using a rack with the experienced or not that experianced FLL Team. Depending on the experience of the team you might have already used a rack for different missions. What's interesting is that on the rack on the whole mechanism and I refer to the whole mechanism as a rack we also have these straight black parts that are also refered to as 'rack'. And you can have one of these racks with one gear wheel and this will make the mechanism work but you can also have two or even three and this will make the whole mechanism much more stable. Now, in the set there are a limited number of these parts but I would assume that you have more sets so that you can experiment. The idea is that the more racks that you have on each side, the more stable the whole mechanism will be. Two is enough, one is probably not that stable especially for lifting the robot. The next note is that when working with students what you can do is to direct them as within the task to build a rack just for the front of the robot. And that's a nice exercise because at the next competition the mission won't be to attach the robot here at the top of this mission model. It might be a different mission and this different mission might involve just lifting the front of the robot. And a rack at the front of the robot is a nice exercise for lifting just the front of the robot. That's why it's a good exercise because some of the next missions of FLL in the next years might be easily solved with a rack. Then you can also do a nice team exercise. You can have one of the teams build one rack, another team build another rack, a third team - a rack and a forth team - a rack. And then you have 4 different racks built by 4 different groups of students and they should all attach the racks to the different sides of the same robot. So, you have like 4 groups working on the same robot. And then they should try to somehow transfer power from the motors and this will involve a lot of discussions between them. How do you tranfer power from a single motor to 4 different racks? And you can of course experiment. Now, this depends on the experience of the teams or the small groups in the class. If they are not that experienced, you start with a single rack and if they are very experinced, you can separate the whole team on different subgroups and try to solve a task where you have 4 different racks at the 4 different sides of the robot and they all lift the whole robot. And if you do, don't forget to send us a video of this, it will be very very interesting for us and for the rest of the community.

The next step of lifting a robot to a mission model is to try to use a rack.