We use a sensor so the robot must be reliable and accurate right? Wrong. The robot is not reliable and accurate only because we use sensors and that's really important during FIRST LEGO League competition. There is a reason for this and in this tutorial we demonstrate and explain how the robot behaves with a basic use of the Motion Sensor to move straight. As a result you will learn why is it important not to stop at this stage and to go to the next level with more advance use of sensors.

Download the program to the robot and experiment with the robot to reach the mission model. Even if you don't have this particular field, you probably have other fields and you can change the program to work for the other fields. Change it. Change the values of the my blocks and then experiment with the consistency of the robot. In this way you will be prepared for the mistake you can expect from the robot.

In this video tutorial we use a LEGO Education SPIKE Prime, the motion sensor, a basic program and we try to do ten runs to demonstrate the consistency of reaching a mission model.

We've described in the previous tutorial this behavior of moving left and right, left and right, and it's a standard algorithm. And on the second run we can see that the robots still couldn't reach the mission model. Something is going on with our robot. It is not consistent and it's definitely not reliable. Start again. We move forward, turn to the left, turn to the right and you can see that even it doesn't make the same mistake if it was making the same mistake each and every time, then probably we can try to fix this, we can try to improve this, but it's difficult. It makes a different mistake each and every time it arrives to the mission model from a different angle, which is kind of strange. What's going on here? And the reason why we are demonstrating is that this program, it relies on the fact that we start the robot from the same time, from the same place in the base and it has to be precisely the same place and facing precisely the same direction. If it is like two degrees to the left, then it will not arrive with the mission model. It is extremely important how you start the robot from the base. It is extremely important to have an attachment that could help you align the robot in the base. And only this way you can be sure that you are doing the maximum to start the robot from the base in the same way each and every time. If you just try like us to start it with a hand, it's not working, it's difficult and practically it's impossible. Even though the program is powerful and the program works the same way each and every time, the initial positions of the robot is different and this changes the whole behavior of the robot. Download and experiment, see for yourself. 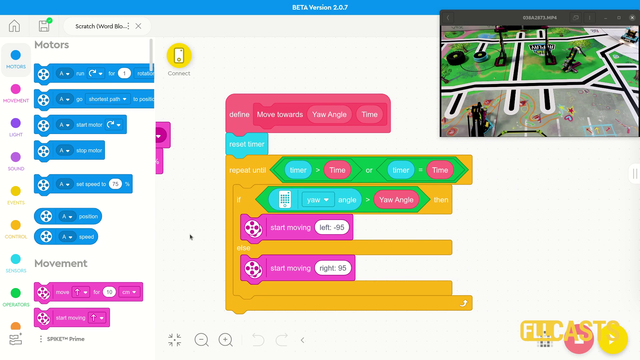 In this video tutorial we use the LEGO Education SPIKE Prime Motion Sensor to reach a mission model on the field. It's a basic use of the motion sensor that we will extend in the next few tutorials and in the same time we take the opportunity to demonstrate what a MyBlock is and how to develop one. As a result of this video you will learn how to make the program easier to read and maintain by organizing the blocks in the program in special MyBlocks that couple them all together.