FLL 2021: Push with an attachment - How to accomplish the Transportation Journey mission Pro Preview

In this video tutorial, we accomplish the cargo transportation mission from FIRST LEGO League Cargo Connect. This here is the truck in this mission. And this mission consists of two mission models. This year is the truck that goes to to transport this truck above the blue line. So we should somehow manage to get this truck after the blue line. We can push it, we can pull it, we can do whatever we want, but it should be after the blue line. For this, we are using the LEGO Education SPIKE Prime robot that would build for this course. Let's see how it goes.

Can we accomplish both of the missions in the same run? Probably. For this mission model we decided to use the same attachment and the same principal mechanism, but in a slightly different way. Just to demonstrate that you can push/pull such attachments in many different ways. Here we approach the mission model and we try to use the attachment. Now, sometimes it doesn't work when we are not aligned correctly. Sometimes it works perfectly well. When we have such mission, it's important to somehow decide on the strategy of how do we accomplish them, especially when there are two of them. On the right we have the recording of the robot. On the left we have the program. In this program, it has two programs inside. One is for when the left button is pressed and one is for when the right button is pressed because it's for the same mission. Although the mission contains two mission models, first mission model, the truck. Second mission model, the plane. When we press the left button, we are starting the program for the truck. When we press the right button, we are starting the program for the plane. So how does the program for the truck works? Initially, we set yaw angle to zero because it will use this angle to detect the rotation of the robot. Motor D is where our attachment is connected. So we set motor D to speed 20% and to position zero. Then we initialize the motors movements A and B, which are the driving motors, and we set the speed to 30%, which is fine for our case. Slow acceleration and move forward for 20. Start view. Here is the initialization and we are now in The Block move with 20 CM Forward. Now, as we stop, we execute the next one move with motor D for 1 second. After we move with motor D for 1 second, we change the behavior of the robot. We set movement speed to 100%, which means we should be quite fast when we are pushing because we want to push on this truck. And acceleration is as a default. And in the same time, we start moving, we start rotating the robot and we rotate the robot until the yaw angle is less than -75, which means it Is -80 -90 that's what we need to do. We need to rotate with the robot and to push on the truck in order for truck to move after the blue line. After we rotated the robot to less than -75 degrees, we stop moving. We take the attachment back up. We go to position zero. Counterclockwise. And then what we do is we try to push on the truck with the robot. Movement again. 30%. Because now it's not important to be that fast. Acceleration slow and we move forward for 5 CM, backward for 5 CM. We just move forward, backward in order to push the truck after the blue line. How does it work? Forward, backward, and then we start moving and rotating with the robot in the opposite direction until the yaw angle is more than minus five degrees, which means it's about zero degrees. And when it is about zero degrees, we will stop and we'll get the robot back. Here it is. We are now in the process in this. Start, wait until where we are waiting with the sensor until the robot detects more than minus five degrees. This here is the moment. And we stop. And now we move backwards.

That's It. That's the program. And that's how this program works. What I would suggest now is for you to download the program and build the robot. Build the attachment and to try to replicate the behavior of the robot with this mission model. There are a couple of things that you can learn from it, and it's quite useful as a principle of how we push on the truck so so that it can move beyond the blue line. Hope this is helpful. See you in the next tutorial. 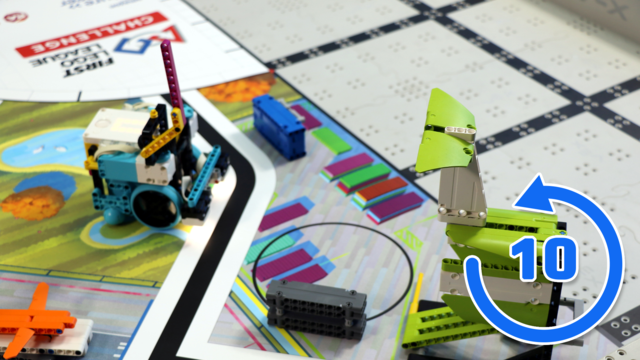 In this course we demonstrate and explain example solutions for the FIRST LEGO League 2021-2022 Cargo Connect competition. As every year we only share solutions after the season is over. With the course you will see example and principles of building attachments and programming consistent and reliable robots for each mission. You can follow the course and move over each mission, replicating the solutions and understanding the programs and explanations. Upon completion of the course you will have many new ideas about how to approach mission on every FLL robotics competition and how to help your team score more points. 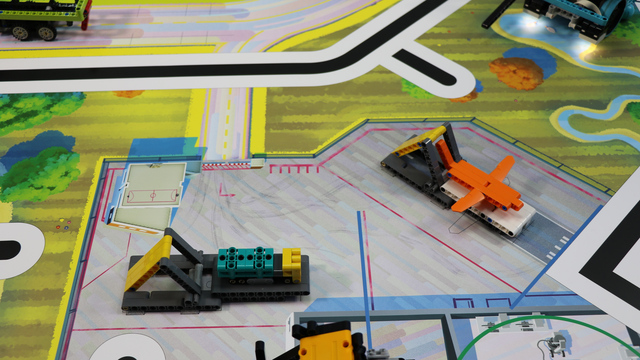 How to use the LEGO MINDSTORMS Robot Inventor Motion/Gyro Sensor