We just had some enormous amount of fun with building and using a catapult/trebuchet. Yes they are quite different, but the result achieved in the lesson is something in the middle. Learn how to fire elements using the LEGO Mindstorms EV3 or NXT robotics set. Challange yourself, your team or your students to build it and fire elements as far and as accurate as possible.

This video lesson is the first of the catapult series. We briefly show what the end result would be and we build the initial construction for the robot. Firing parts requires no additional force since the force of gravity is used. Loading the catapult can be done by hand or automatically with a motor and an NXT-G program for the robot. At the end of the series we would have build a completely automated catapult the loads and fires automatically.

The construction from this first video lesson is divided on the following modules:

Simple and not very large. If you want to improve the stability of the robot you should make the base larger.

You can always make the frame taller, but keep in mind that the taller the robot frame, the more unstable it becomes.

The lever should not be longer than the frame and should have a proper construction at the end that would hold the parts until they are fired.

Using angle LEGO beams we build a nest for holding a weight. The haviest part in the set is the brick and we use it as a weight.

Building instruction for both EV3 and NXT. The whole catapult is build in exactly 78 steps. 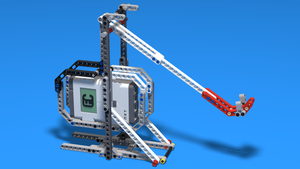 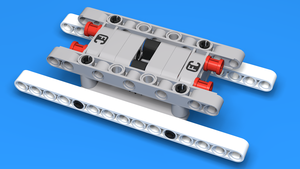 This video is the first of a number of videos in which we will show you how you can construct your own catapult. We will provide you with constructions for both EV3 and NXT versions of the robot. And you can use this very funny construction to fire different small Lego parts to about 1 meter - 1.5 meter. It's completely automatic. You can load it and reload it completely automatically. We'll be happy to get your feedback and if you try to construct this robot at home or in your classroom.

First, I'll start with the base of our catapult. It's a very simple construction - it has just a frame and four beams attached to each other. The larger the base is, the more stable the catapult will be when it fires different small parts. Now, I won't be constructing the robot every step on the way. So, I will show you how you can attach the basic modules and what's the idea behind them. We use two of the these modules to build the vertical frame of our catapult and it looks something like this.

A problem with this frame is that it's not very stable. As you can see, it's kind of fragile. So, we can solve this by adding two additional beams that will attach the frame to the base at a certain angle.

Here it is. And it's much more stable than the other frame.

And we do this on the other side as well. The second step of building our catapult is to build a lever that will fire the small Lego parts. We'll use something like one of these. And now we must find a way to fire them. I have built a lever here. It works in the following way. We attach it to the frame - like this.

And now it moves freely up and down. If we find a way to add some parts at the end of this lever that will hold this small Lego part, we'll be able to fire it. Like this. And again, I've come up with a solution to this. We'll use these red angle beams. They might not be red, of course. We attach them at the end of the lever.

Now we can actually fire our part. If I move the lever very fast, it will fire the part. Like this. The last step of building our catapult is to find something heavy that we can attach to this end of the lever. And when we press probably a button or something it will lift the lever and fire the part. A simple solution is to use the brick from your set. The brick is probably the heaviest part. Here I am showing the NXT brick but you also have instructions for building the robot using the EV3 version of Mindstorms. To actually hold the brick and use its weight at one of the ends of the lever, I've built this, let's call it, a nest. And we can add the brick to the nest. It's constructed mainly from angle beams and a frame and some pins that attach all the parts together. Now we should find a way to attach the nest to the lever so that we use the gravity force. And when the brick moves down, the lever moves up and we fire parts. For this we can use the following mechanism.

We can attach one beam here.

Then attach the nest to one of the sides of the lever.

Here it is. I'll make it more stable. We add a bush here and here.

And it works in the following way. When you release the lever and the brick goes down, the lever goes up and we can fire a part. Like this.

Again, this is how the whole construction works. Due to the gravity force, when the brick goes down, the lever goes up. If we have a part here, we can fire this part. I will just leave it more loose. What you can see is that the lever moves from one side of the robot to the other. But that's not how the catapult is supposed to work. So, we should add some kind of a stopper right here. On the upper side of the frame. And if we add this stopper (let me just attach it),

we can see that we fire the parts but the lever stops.

We can experiment with different positions of the lever depending on the force we would like to use for firing and when the lever should stop.

For example, right here and then the second one.

We add it like this. And we attach a bush on one side and then on the other. Now, again.

One more improvement we should add is a small axle - at the lower part of the catapult. Right here.

We'll need this axle in the next episode. It also helps the lever not to reach the ground.

And we have a working catapult.

One more bush missing on this side.

Here it is. Let us fire something.

OK. I'll be happy to get your comments. In the next videos, we'll attach a motor and a sensor to the construction so that we can make it completely automatic.