We should multiply the error by a certain number and then add it to the steering of the LEGO Mindstorms Steering block. In this way, by changing the coefficient we change how much/fast should the proportional part influence the steering of the robot.

Influence of the coefficient

When the robot is oscillating too much - this means that the coefficient for the proportional part is too large. It should be reduced.

When the robot is not returning fast enough to the straight orientation - this means that the coefficient for the proportional part is too small. It should be increased. 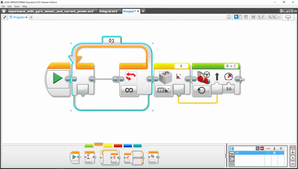 then even a very small change in the gyro sensor would make the robot turn very fast and try to return very fast to the straight position. And this is something that you should experiment with depending on your robot and the size of the field and the requirements of the competition that you are trying to achieve. So, it is important to have this coefficient. It could be just one or it could be even less that 1 let's say 0.3. And there is no golden rule here or no golden value. It is something that depends on the conditions. So, you should experiment and find the value that matches the best for your robot and the behavior that you would like to get from your robot.

The first part of making the robot move straight is to keep it oriented straight. While it moves it could make an error and turn slightly to the right and then the program should turn in back to the left to make its orientation straight. In this video tutorial, we would discuss how to implement a program to keep the robot orientation straight even when we are pushing or pulling it to either side and in the same time it has different wheels.