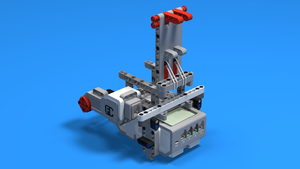 Many times you just have to throw something, or it's a good idea to throw something from the base, so that it could reach the mission, and solve mission from the base. You won't lose any points, and it will be quite fast and today we are showing such mechanisms. So we are solving the April 2012, Senior Solution Mission where we had to throw the ball from somewhere on the map, and then reach these parts and get them on the field. That was our mission, but we are solving it by throwing something...by throwing the ball from the base.

But it's interesting in a number of ways. First, it's a pinless attachment. So, as you can see it's quite fast to move this attachment and place it on the robot. So it's just...sorry, too much firing and it's deconstructed. Again, you just place the attachment on the robot. And that's it. Then we must trigger the firing because we can do it by hand and we pivot the model. Now if I load with the model we are holding the attachment, and while holding the attachment we can move on the field or we can even fire from base. It depends only on the configuration of the rubber bands. And when we decide, we release the model, and we fire.

It's important to notice that the EV3 model, the EV3 competition robot from video 58 could be extended right here on both of its sides so that we can add pin-less attachments to it like this. So it's quite fast. Just add the attachment, no pins involved, and we can then solve different missions with this attachment. Then we load. We move on the field, or even from base. We release, and we fire the ball.

You can find the instructions for building this attachment below the video.