We have skip the programming, because there are other tutorials on positioning and moving on the competition field. But we are demonstrating the way of thinking.

Accomplishing most of the FIRST LEGO League (FLL) missions does several things:

Of course, it is more difficult, but as everything there are advantages and disadvantages.

First we start with The Door. The Door as I've told you is an interesting mission. We have to push the lever and only then you can open the door, so if you don't push the lever down you can't open the door. We add our attachment to the robot, like this. We add the ball, we need this ball for the football mission, we place the robot in the base, something like this and we start the round. When we start we align the robot to some of the borders, so it's a matter of positioning of the robot in the base. You can choose to position it like this on the west border or here on the south border, but when you start the round you turn the robot and then you move forward. You move forward until the sensor, here, the ultrasonic sensor detects the door at a given distance. When you detect the door you just move the lever down.

Then you can open the door.

As you see the ball is not following it because it's attached to the attachment. It's stays in place and then we again lift the attachment and we continue to the other missions, for the other mission we must leave something near one of the mission models and it's something that we build with hands and we can just place it in front of the robot. Now when the robot moves, the small mission element moves with the robot. It's just here below the attachment. This is how we solve the door. As we have accomplished the mission with the door, we move the robot and we must now place this small construction.

We must place it in this white circle. We move with the robot.

If we have to we lift the attachment a little so that we have more space and just by pushing with the robot, we place this parts in the white circle. They are currently in. Then we go for The Search Engine mission. Let's see how we solve The Search Engine. The next step is to solve, to accomplish The Search Engine mission. As you may recall from the previous video the mission is the following. You see red here and you must push the lever and after you're pushed you draw a color, for example, yellow and you must then take the yellow loop and return this loop back to base, so it's actually 2 parts in this mission. First you must push the lever and then you must take the loop. As you can see, we have the robot here and it has this attachment and it's quite well designed for taking loops, so as we placed the parts here in the previous mission, we continue with the robot. We must somehow push this lever, you can see in previous videos, different ways in the current video we'll just continue with the robot and moving with the robot we can choose to align either to the wall, you can't see but the ball is not following and we can align to the wall and after we align to the wall we know that we are quite near to the mission element, we can turn and it's just a matter of position and then we can slightly push on the model. We push it so that we get the same color that was previously here in the mission model and then we know that we must take yellow. We just turn the mission model for 360 degrees and we know that we must take yellow. After we have slightly pushed this, we must take the yellow loop back to base. Now that might prove to be quite challenging but it's again just a matter of turning, you can turn, that's a strategy, turn, turn again and align to the wall and after you align to the wall, you at least know of the positions on the field. You know that the border is aligned to the map and you are aligned to the border. Then you continue forward, turn and then you align to this red line with the 2 sensors. After we align there are many videos for positioning robots on the field. You can see them in the links below and you can learn how to align to the lines. After you align, you again turn, it might be possible to align to this black line so that you you know exactly where you are and after that you return, you lower the attachment and you take the yellow loop,

These are a couple of structured examples and tutorials of how the missions for FIRST LEGO League 2014 Word class competition could be accomplished. We've gathered recordings and explanations from which students and teacher can learn a lot. There are missions and attachment for rubber bands, lifting with rubber bands, throwing and other interesting and challenging robotics missions from the competition. 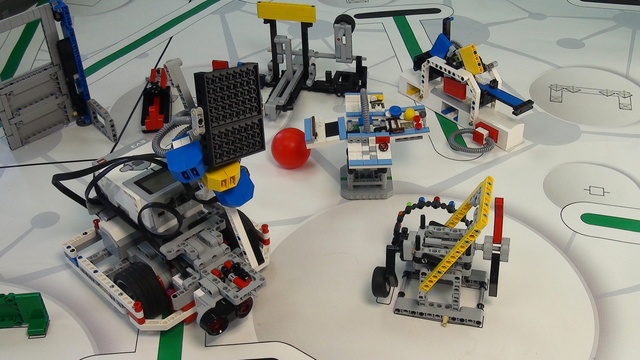 One attachment to rule them all

How to automatically detach an attachment from LEGO Mindstorms. Example with...