In this tutorial we demonstrate how accurate the robot is when we are moving it slow vs when moving it fast. The point of the tutorial is to show that moving slowly is generally much more accurate. It is not accurate enough for a FIRST LEGO League competition, but if you have to move without the use of the sensors you can at least move slow.

Build the robot, download the program and experiment with it. See what are the results for your robot. If you have a SPIKE prime instead of Robot Inventor try to translate the program for SPIKE prime. It should be the same.

In this video tutorial, we use LEGO Education SPIKE Prime and we demonstrate a really interesting program for moving the robot from the base to a mission model that's near the base. With this program, we have a really interesting feature. There are two buttons on the brick, the left one and the right one. And based on the bottom that we've clicked, the robot will behave in a different way. First, if we start the robot with the right button, we'll move really fast with the robot. That's it. And now if we press the left button, a different set of instructions will be executed by the robot and the robot will move really slow. The point here is that the accuracy of the robot is different when we are moving with different speed. If the robot is moving faster, then the accuracy will not be very great. If it is moving slower, probably we can get to a better accuracy. Let's try it one more time. Move fast. You see where the robot arrived and move slow.

Again, not very accurate. The point here is that we should move to sensors. But before we reach sensors, let's explore the speed of the robot and how we can develop such a program.

Here is a program for the robot and we will explore how we've developed a program that makes the robot move fast. And at the same time with pressing the other button, it moves very slow. On the right, you can see a recording of our tutorial. And on the left we have the program. And in this program we use the movement locks. When the robot starts, I'll start with the left side. When the robot starts, when right button pressed. And this is one of the blocks that we can use to detect if we press right button, when right button press. Now, where is this block? If we scroll in the palette of blocks right here. And if I move down and here I could see that there is in the events a number of different blocks that we can use and we can use this one here and here. We can configure when left button press or when right button press because the brick has two buttons and we also can configure, release or press. In our case, when the right button is pressed, we would like to set a movement to Motors A and B. And we like the speed of this movement to be 100%. And then we just move forward, return, move. That's the program. That's the problem that we are executing with robot. How does it look like if we start a robot? Initially, we are pressing the right button right here the right button and we move with the route, we move forward, return, we again move forward. These are the three movements that we execute with the robot. Move forward, turn and move forward. We arrive at the end. Let's now see it with the left button. The program is the same. So when an event occurs and this event is press the left button, so when we press the left button, what will happen is that we move the robot with 30% power. Here it is, we are pressing the left button and we start with 30% of the power. We are currently in the first block, move for 30 CM and then we turn

and we start moving forward for 55 CM and that is pretty straightforward as a program. The point here is that even if we try to experiment with moving the robots slow and fast, what will happen is that the robot still won't be accurate enough for us to successfully participate in the FIRST LEGO League competition. But we move through this explanation for you to understand how you can program the robot for accepting events and listening for events from the right button and from the left bottom and to also see a demonstration that you can move fast, you can move slow. The accuracy is still not enough and we should at a certain point reach the sensors. See you in the next tutorial. 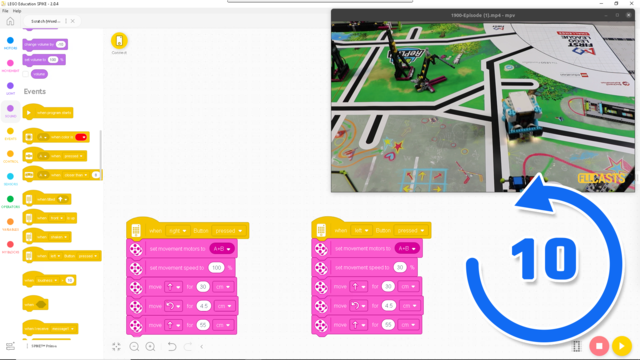 In this tutorial we demonstrate how accurate the robot is when we are moving it slow vs when moving it fast. The point of the tutorial is to show that moving slowly is generally much more accurate. It is not accurate enough for a FIRST LEGO League competition, but if you have to move without the use of the sensors you can at least move slow.