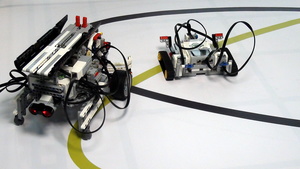 - In this fourth part of the series we will enter into more details about the programming for the First Robotics Olympiad 2014 Junior High Competition.

I recommend that you check out the things below with the previous videos so that you can see the missions and how they are accomplished. The program is the followin: first our satellite robot , it moves. And it moves until it detects an object that's no less than 50 centimeters. This is about 4 inches or 5, 6 inches. So about 6 inches. And as we detect the ball we then move. And we should either catch the ball or skip the ball. And for this we detect the color of the ball. If the color of the ball is red, then we must catch the ball. If the color of the ball is blue, then we must skip the ball. And these are the names of the blocks. One of the blocks is called "Catched." And the other is called "Skipped." If we are not detecting any objects. Then we are just waiting for the satellite. And as we detect the satellite we must release the cargo into the satellite. Now for the Catch the Ball, it's pretty simple. As a block it's just a few blocks that moves forward, backwards, lifts, etc. For the Skip the Ball we are just moving again forward, backward, lifting. These are just simple motor movements that are dependent on the specific model. But the real logic of the program happens in this main program Catch. Then we also have the Move To. Move To is a program that follows the line. It follows the green line until it detects a black line. And this is a simple program for following a line. And we also have the 3StateFollows. We're also detecting and searching for the black line. And this is the main idea of our program. Again, we just move until we detect an object. If we detect an object we must decide whether to catch this object or to skip this object and while moving. If we do not detect an object then we must find the line, wait on this line until the factory satellite arrives. And we release all the cargo in the factory satellite. If you have any questions for the program drop them in the comments section below. You can find the program uploaded. And in the next videos we'll even improve the program further, so that you can download and print it directly on your own robot. And we are planning for a few more videos in this series, so that we can catch more of the balls.