We are working on the World Robotics Olympiad (WRO) 2013 competition and its elementary part. The series will introduce three different concepts and this would be Arrays, Menus and Counting different lines. In the video you will see the robot working as it is in the final stage.

The robot starts from the green array and carries different blocks. The blocks should be placed in the corresponding region where the match should be done with the colors of the blocks and region.

But the color of the regions is configured right before the competition. The challenge is actually that the robot should be smart enough to figure out how are the regions positioned as quickly as possible.

Not that hard - just leave an object at a location

Kind of like more difficult - return to the red region moving over the different obstacles.

For World Robotics Olympiad Ball Collection competitions we prepared an interesting Robot Base Chassis that could be extended with a container. The container contains the ping-pong ball. A mechanism collects them. This LEGO Mindstorms EV3 building instructions are for the chassis of the robot and were one of the versions from a series of robots. 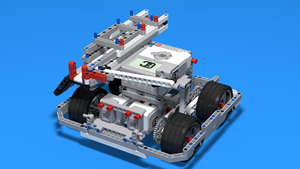 - In this series of video tutorials we are working on the World Robotics Olympiad 2013 and we'll use this competition field as a way to work on three different concepts, first arrays and how do we work with arrays with the Lego Mindstorms EV3G software, then how do we program a menu. We need the menu to program the robot for this field and we are also counting different lines which should be familiar by now. And these are the three concepts that we are working on in this World Robotics Olympiad 2013 Elementary Challenge.

The rules of the competition are the following: the robot starts from this green area here and it carries these blocks. And we have two green blocks, two blue blocks, sorry but we didn't have the bars correctly, and we have one red block. And the idea is for the robot to move on the field in this region here and to drop each of the blocks in these three regions. So the red blocks should go in this red region, the blue blocks, these two, should go in the blue region and the green should go in this region. And when the robot starts, it has these five blocks here in the base. We add them on the robot and the challenge is that these three different sectors are configured before the competition so they could be changed. So the green could be placed here and the red could be placed here, and the blue here. So we don't know their arrangement before the start of the competition. So at the start of the competition we must somehow find a way to tell the robot, "Okay, the first region is green, the next is blue, and the next is red. So this is the challenge. Then the robot moves after it drops these blocks. It moves and it must reach this black spot here. And on this black spot here we have this part, and we must push this part over the gray area, the gray area right here. And as a third mission for our robot, we have different parts on the field right here. And these different parts are just lego parts like this, so exactly like this. And they are positioned like this, nine of them. And each one consists of two of these parts and the robot must move over these part so it can also go around and arrive at this red region but it will receive fewer points. And these are the three challenges for our robot. Our strategy would be first, to accomplish this part of the field and to drop the blocks into the sectors, then we push the element to the gray area and then we return back to this red region here. And this is the competition. Let's start with the mission one by one and I'll introduce you to the robot and how do we program the robot for accomplishing the different missions.

The competition is an elementary challenge, an elementary competition so it's designed for smaller students and we have also designed a working robot that will be easier for smaller students and to get them to introduce them and to pass through this course. But it will also be very interesting for students that are more advanced. This here is the robot, it's an EV3 Lego Mindstorm robot and it consists actually of a base with four wheels and we have this mechanism here. It's designed to drop the different blocks. And we also have a light sensor here that we will use for counting the lines. Now in the EV3 Lego Mindstorm set we have only one color sensor and we could have solved the competition in many different ways but we decided to stick with one color sensor because there is one color sensor in the set. And that's why we are using only one color sensor. There will be no alignment to the lines, only counting the lines and if needed, probably following the lines. You can find the instructions for this robot below the video and we can now actually dive into the programming and construction of this robot. 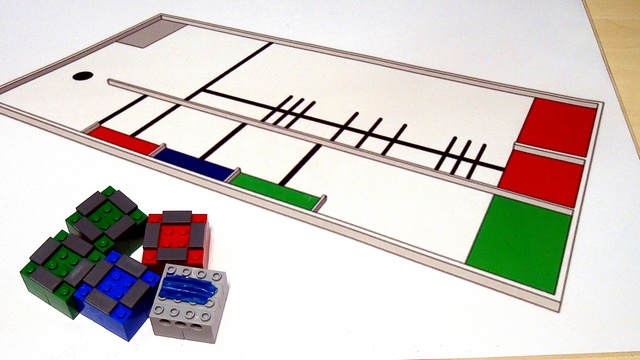 We are working on the World Robotics Olympiad (WRO) 2013 competition and its elementary part. The series will introduce three different concepts and this would be Arrays, Menus and Counting different lines. In the video you will see the robot working as it is in the final stage.