Based on your feedback we have decided to show you the live process of building a complex LEGO Mindstorms Competition robot without having the whole robot ready yet. We would be making mistakes, showing them and taking up the challenges right in front of your eyes. The first construction would not be perfect but we would eventually arive at it.

Yes, we have watched the Marvel 'Kick Ass'. And yes, this robot will be big and angry.

The robot construction has a 'front', 'back' and a frame in between. In this video lesson we are starting with the 'front' where we use a paired gear wheel. The power would be transfered from a mindstorms motor to the front wheels.

We construct, experiment and post. You give us feedback and based on the feedback we make modifications on the robot. So, build it with us on the way, try to take up a specific challenge with it and leave us a comment below on what has and what hasn't worked for you in this robot. 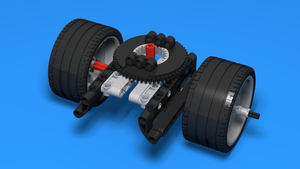 Construction Innovation is the task for this robot. Why? - we challenge students to come up with their own solutions and not be afraid to experiment. Use the task in your classroom, for your team or at home to engage students in learning.

There are 3 task from an normal, medium, hard complexities giving 1, 2, 3 points respectively

In this episode, based on your feedback, we'll start building a new competition construction. It is a very interesting construction and in this video we are showing only the front. It has probably three or four main features. First, it's very, very heavy loaded. So, it can take a large load. It also uses these interesting black parts that are not used very often and it has these frames that will help you align to the walls during a competition.

First, let's start with the wheels. We've decided to use the large wheels from the EV3 set. As you can see, probably you have your wheels with you, they are 68.8 by 36 mm. So, we are using these wheels. We should now find a way to attach them to a frame. To make them turn, we've decided to use this gear wheel. I'll use the parts and attach them to make the frame. Repeat the same on the other side. Now we can add the wheels to the frame.

All we need now is to find a way to transfer power from the motor to the gear wheel so that we can turn the wheels whenever we want. Now we have the wheels and we have the frame. I'll add the wheels to the frame. I will use also a bush so that they are stable.

It's not very easy. And the other one here. Now, the tricky part is to actually add the three gear wheels in a way that they could work together with the large gear wheel. We should do this in two steps: first, we add the axle; then, we add the gear wheels.

And the third one. It's ready.

The interesting thing about this construction is that all three gear wheels are working together with the large grey wheel and we can see that the whole construction is turning. Now, we have to find a way to stabilize the gear wheel so that they won't fall and I'll use these small parts here. I'll add them.

Here it is. We have a gear wheel which is turning and we can transfer power from the motor to the large gear wheel and in this way turn the frame.

The problem with this construction is that we have large gaps between the gear wheels and the large gear wheel. So, we have to find a way to fix these gaps. The problem with this construction, as I mentioned, is that there's a large gap between each of the gear wheels and this may cause problems in the next episode. So, let's look for ways to fix this. I've come up with a solution. It's very, very simple. First, I'll have to detach this axle. Then remove these elements. Reduce! Use as few elements as possible!

This one goes here and this one - there. So, I've changed the position. We add the black parts to the gear wheel. We add the other ones.

In the next episode we will continue with improving the front part of the robot so that it becomes more stable and we'll add additional frames to it.