Motors can be placed in opposite directions... opposite .. directions. Robo-builders might have difficulties imagining it so we have build one. One of the motors facing forward, the other backward. It is interesting how this robot turns.

This is an LEGO Mindstorms EV3 construction with four motors, Two large and two medium. The robot is "thin" and is taking up small space.

Of course the axles for the wheels are connected on two places.

To make the robot move forward you must turn the motors in different directions. That is a different experience.

Find the complete short course at:

EV3 Robot with Motors in Opposite Directions. The Frankenstein.

Frankenstein LEGO Robot with motors in opposite directions

Building instructions for the robot build with LEGO Mindstorms EV3. It is called "Frankenstein" because the two motors are in two different directions. 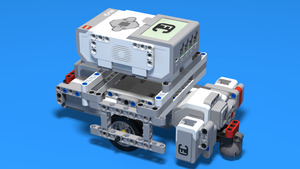 Program the robot to more in a triangle. Create a program, take a picture, upload a video and share it with us.

Today I would like to discuss with you a new robot. We call it the Frankenstein and it's a very interesting robot, because the motors are placed in an opposite direction. Now let's see what we can do with this robot.

The robot is constructed from the LEGO Mindstorms EV3 set and it has 2 large motors, on on the front and one on the back, if we consider this to be front of the robot, we have 2 sensors, color sensors and 2 medium motors. What's interesting is that we have a medium motor on the front of the robot and we have a medium motor at the back of the robot. So we can add different attachments both to the front and to the back. As you can see this robot is, let's call it a thin robot, it's not taking so much space compared to other robots that you can build. The reason for this is that the 2 large motors are not placed next to each other, but they are placed in an opposite directions. This means that, for the robot to move forward with both tires, one of the motors should move forward and the other should move backward. That's a very interesting challenge for you to turn your head around and to think about. How do we program this robot to move forward, backward and to turn left and right. The third thing about this robot is that the axles on which the tires are connected. They are touch the robot on 2 places. They are connected on 2 places. First on this frame and second on the motor. So the axles are quite stable. I'll now try to program this robot to see how it works. Let's first make the robot move forward.

We place a new block, the Move Steering block. This block is controlling ports B and C and these are the ports where our motors are connected. Now if we start for 3 rotations and the power of 50. We try to download and see what happens.

In this case the robot rotated, because both motors are moving forward and the robot rotates and turns right. So when the motors are moving forward the, robot is turning right. We can assume that if move the motors backward, it will turn left. We need to move one of the motors forward, the other backward in order for the robot to move forward. Let's check this. The Move Steering block has an option for steering and it's currently 0, this means that both motors work in sync and they both move forward. Now if I change this value to -100, this will mean that one of the motors will move forward and the other backward. From this our whole robot will move forward. Download and run.

As I start the program now, because one of the motors is moving forward and the other one backward, the whole robot moves forward. I can change the steering to +100 and then the robot will move backward. It's a nice way to think about the robot that it doesn't always have to with the 2 motors moving in the same direction. The construction might be different and in this case it is different and it's a really nice way to work with students in the field of STEM and to get them to think about this and to experiment with this robot and to try to move the robot forward and backward and do different turns. In the next video we'll try to do more complete program and we'll make the robot move in a square.

EV3 Robot with Motors in Opposite Directions. The Frankenstein.

Why is it hard to make a humanoid robot?