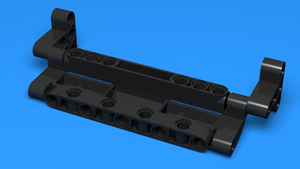 In a previous video we built a rubber band attachment that solves the 2012 Senior Solutions competition model. And in this video I'll like to further stop the attachment because it was a pin-less attachment built from five different parts. And we were attaching this attachment very easily to the robot without any pins, very fast. So I'd [inaudible] that was because we had some questions from some of you.

This here is the EV3 competition model from video 58. This here is the front of the robot. It has a motor. It's a very nice, stable construction. You can use it at the competition. And basic challenge for this and for every robot construction are actually the attachments that you build for solving different missions. Because the missions may vary from this, like oven, to loops, to taking different small elements. And a very successful robot is one where the attachments are very successful, are working correctly 100% of the time. And the other thing about each competition is that you're bounded on time. So you have a specific time and you're limited by this time. So it's very important to have attachments that you can place very easy on the robot without any hesitation, without any mistakes. Because if you make a mistake when placing the attachment it will cost you some seconds and that's not something that you want at the competition. First, you can build an attachment with pins, small black pins. And you can actually attach attachments with these pins. For example, like this and now I can attach something on these pins. But a more interesting solution is how to do this without the use of a pin. And in the EV3 set you have this part. If I add some elements to this part, you'll have a very interesting result. I place the attachment on the field. And after I place it, I just place the robot on top of the attachment. Like this. And now I can move around the field and solve different missions. And I could actually extend this attachment here with anything I like. So just-- it's just very easy and very straightforward. Just place the robot on top of the attachment. It's four seconds. And of course you can have different attachments here. For example this one. And just add this. And now we're at the competition, time is . . . and place the robot. And that's it. Very fast, very easy. Here it is again, the whole attachment. 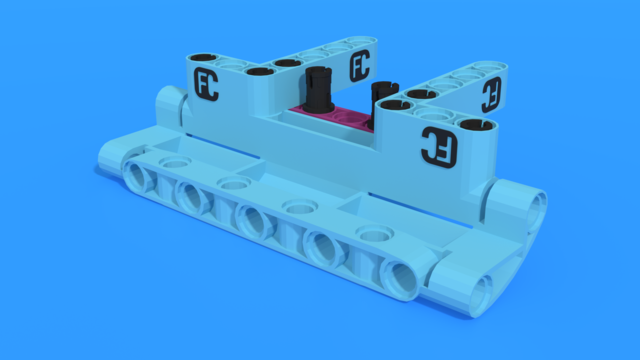 This quick pinless attachment is designed for collecting parts by pushing them. It shows the principle of putting a robot of an attachment in a very fast manner. Such attachments are popular at the FIRST LEGO League competition. The attachment uses Luly, a small LEGO Education SPIKE Prime competition robot with 3D building instructions as a robot base.

How to on 'Easy Detach of Modules' in LEGO Mindstorms. Example with Robot...