"What is the light in the room?" - should it even matter. You can use one program for all lighting conditions by calibrating the color/light sensor of the LEGO Mindstorms EV3/NXT robots.

This is the seven video tutorial on the Capapult and we show how you can calibrate the light/color sensor to make sure the Catapult could still work in different lighting conditions.

The problem is simple - you build a robot for a specific task. For solving a specific problem and this robot uses a light/color sensors. It probably works every time until you change the lights in the rooms or you switch to a different room.

This is where calibration comes to play. You tell the sensor basically how "much light" there is in the room and what should be considered black/white as colors. This could greatly vary. Another example where you should use calibration is when following lines with EV3 Mindstorms robots. 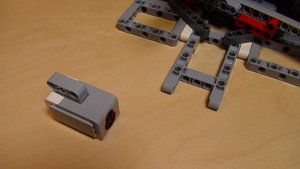 - In the previous episode we implemented a catapult that can load and fire automatically using the color sensor but we stopped on calibrating. In this episode we're going to implement the calibration of the sensor so that when the light turns off the catapult will continue working.

Initially we start with the program from the previous episode. Check out the link below and you can remind yourself. We would like to calibrate the sensor and the parts of calibrating process holes. We wait for a push of a button. We compare that we have pressed, for example the second button is pressed and released. When the second button is pressed, released this means the last button in the middle, we take the value of the color sensor and to set this value as the maximum value.

The sensor detects black or this should be considered its minimum value. Let's press the button again.

Now we release the catapult and we start the program.

As you can see, even without lights in the room because we have calibrated the sensor, the program still works.