The EV3 LEGO motors are electrical motors. You may hear the term actuators too.
A motor needs a power source and typically that is the battery of the brick. The power goes from the brick to the motor via cable.

Muscles of the robot

Motors can make the robot move around when used with tires.
Motors can drive attachments so that the robot lifts and moves objects around.

The Large Motor is typically used to drive robot wheels.
The Medium motor is used for attachments.


Orientation of the motors

Large motors have more power compared to the Medium motor. Medium motor is more precise that the large motor.

The subject of this video are the Lego Mindstorms EV3 motors. And we have a number of different motors in our set, so let's take a look and discuss some of the features of these motors.

These are electrical motors. So, what you need to do to use these motors is: First, take the brick then to connect the brick with a cable to the motor. And now, if you have the correct program what will happen is that the motor will be powered by the brick and the brick has a battery. And, it's an electrical motor. Also, these electrical motors are most of the time in the field of robotics referred to actuators. And you can think of the motors as the muscles of the robot. With these motors the robot makes some of the attachments move and the robot actually moves with these motors. As you can see, we have different type of motors. This motor is referred to as 'the large' Lego Mindstorms EV3 motor. And this motor is referred as 'the medium' EV3 Mindstorms motor. And there is no small motor. So, we have only large and medium. And there are a couple of differences between these motors. First, as you can see when you have a construction and when you place these motors you can add different attachments but in different orientation. For example, when you use the right motor you have the attachment at the side of the motor. Either on the left side or on the right side. And when you have the 'medium motor' you have the attachment at the front. Also, I won't enter into details here but the 'large motor' is more powerful while the medium motor is more precise. So, you can again decide depending on what exactly you want to do to use either of the two motors. And in the set you basically receive two large motors and one medium motor. The idea is that you use the large motors to move the robot because you need more power here and more torque. While you use the medium motor to control a hand, to control a different attachment, to control something that's on the robot. So, the two large motors are for moving and the one medium is basically for attachments. So, that's a rule of thumb. It's not a requirement but it's a good way of thinking about the motors.

Also, when you have the motor and we'll enter again more details in some of the next videos of the course. When you power the motor you see that this part will start rotating. And this is the default positive side of rotation, it'll rotate forward in this way. While the rotation in the reverse will be rotating backward. And when we get to programming and when we start actually programming these motors we'll again stop at this just to make sure that you understand how do you move forward with the motors and how do you move backward. 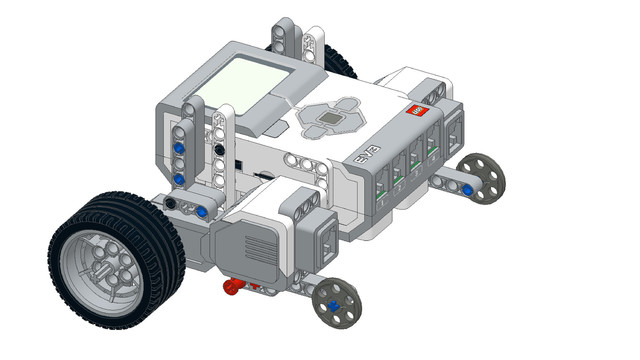 Series of instructions make a program